Where does the money come from?

One of the first things I do when starting a new project is to ask the team a very important question: “Where does the money for this project come from?” I usually get a range of surprised looks. Surely I must know that the money comes from “donor X”.

“That’s right, the money for this project comes from people”. All kinds of people. Rich people, poor people, people who paid taxes, people who made donations, people who think their money is being used to help people in other countries. The USAID tag line “From the American people” is quite literally true. It works a bit like this: 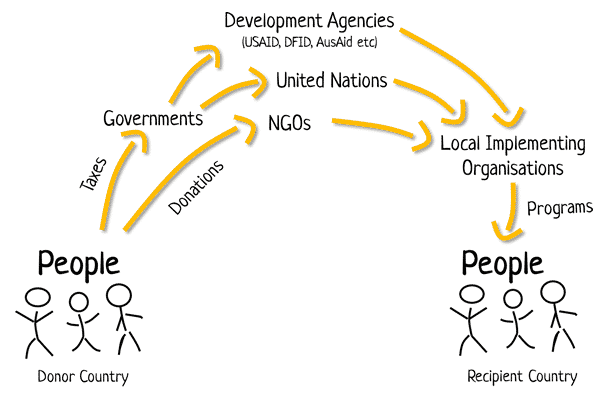 If most aid money actually comes from people, why did my team not know this? Perhaps because they’re all local staff from the recipient country. They had never donated their money to an NGO. Their taxes were not used to fund aid programs. So why would they know? They had no experience of what it’s like to be on the other end of the chain and nobody bothered to tell them.

Of course, if you don’t know that aid money is donated by people then it might as well be magic money dropped out of the sky by donors. This misconception can be seriously damaging. If the donors have magic money then why not waste it on unnecessary per diems? Why not use it for parties? Or a new car? Or extravagant staff retreats?

This was exactly the problem I faced before I realised that most of my team didn’t know where the money was coming from. Every time I would cut a meal allowance or say no to a staff party there would be eye rolling and complaints. Clearly I was just a party pooper. Of course, it’s not just local staff that have this problem. While expats may know where the money comes from it’s easy to forget or disregard this when thinking about salary and benefits.

I normally find that a frank discussion about the source of aid money is followed by a marked change in how people spend the money. It also allows me to ask an important question every time I receive a budget request – “If you donated your own money to this project, would you be happy for it to be spent this way?”. Quite often the answer is no. So in that case we should treat other people’s money the way we expect our own money to be treated.