Collecting data on smartphones and tablets with Device Magic

Your organisation probably uses forms, a whole bunch of them. Forms for leave requests, forms for acquisition requests, forms for inventory stocktake, baseline survey forms, satisfaction surveys, etc. Basically… a whole lot of forms and surveys and the majority of them are likely to be paper-based. A number of these forms are also likely to be filled in when someone is not at a computer, for example an inventory stocktake or a participant satisfaction survey. In these instances, the ability to capture a form submission through a mobile device would be great.

Mobile Forms by Device Magic is a tool for designing forms and capturing information primarily through mobile devices. There are other tools out there for this purpose that may be closer to your requirements… this is a review of Mobile Forms.

Collecting data without an Internet connection 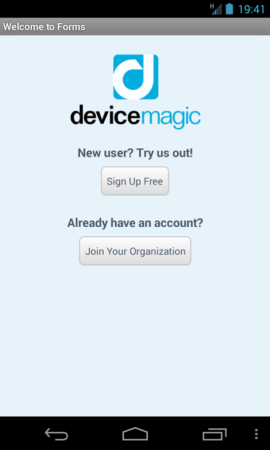 One of the best features of systems like Device Magic Mobile Forms is that they allow you to collect form data ‘in-the-field’ when you don’t have access to an Internet connection. The form entries are saved to the mobile device that you’re using, and can then be bulk uploaded when reconnected to the Internet. This helps to overcome one of the biggest limitations of trying to collecting information in-the-field, a lack of sufficient mobile signal for an Internet connection.

Mobile Forms by Device Magic works on mobile devices and tablets running Android, iOS or Blackberry. This means you can use smartphones running Android such as those made by Samsung, HTC, LG, etc., Apple iPhones and iPads running iOS and also a number of Blackberry phones and the Blackberry Playbook (tablet). Note that you can pick up pretty cheap 7-inch Android tablets these days for under $100 (you will need a Wi-Fi network to connect to, as opposed to being able to connect to direct to 3G).

If you need more details on compatible platforms and software versions, check out the information on Device Magic supported platforms.

Can I run Device Magic Mobile Forms on a basic mobile phone (e.g. a Nokia?) 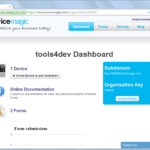 Device Magic have kept the interface for Mobile Forms very simple, and while it might not be the prettiest app around, it does behave consistently across a range of platforms and devices. This is quite difficult to achieve given the number of devices and operating systems (e.g. Android, iOS and Blackberry). Device Magic have also indicated that they will soon be adding Mobile Forms support for entering data through browsers (i.e. Chrome, Firefox, Internet Explorer and Safari). This means that forms could be filled in through a normal desktop computer, laptop or even a tablet or smartphone through the browser (as opposed to through the app).

Repeating elements of the form

Question groups and sub-forms are a nifty feature of Mobile Forms… and offer a clear advantage on paper-based forms. Handy in situations where the total number of responses is unknown. For example if you’re doing an inventory of medical supplies and need to know the details of each type of bandage, but don’t know all the different types that should be accounted for by the form. Sub-forms allow you to create a new entry for each type of bandage in the inventory form, meaning you can capture all the required details (e.g. name, quantity) without having to know this information at the time the form is designed. Another example would be when recording the details of each child that a group of mothers have had. A sub-form can be created for each child of each mother.

Certainly a very strong feature of Mobile Forms is the ability to capture data that was quite complicated previously. Photos, signatures, location (geo-coordinates) and audio recordings are all able to be captured.

Say you’re plotting all of the local health clinics in a particular area and want to capture extra information such as the number of medical staff and a photograph of a particular piece of equipment. All of this information can be captured through one form in Mobile Forms. 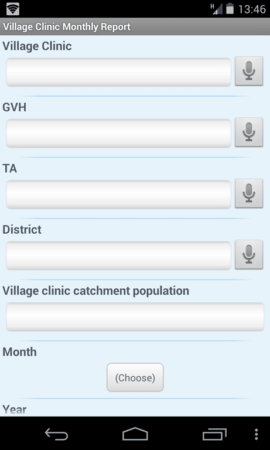 Cost is always a very important consideration when looking at online services. Mobile Forms is a Software as a Service, meaning that you pay a subscription model as opposed to owning a license to use the software outright (e.g. like a copy of Microsoft Windows).

Device Magic prices the Mobile Forms service as a set amount per device per month, starting at $10 for one device (as of March 2014). Thankfully, all of the paid plans include an unlimited number of forms and the most basic plan has pretty much all the features you would need to get going.

The Mobile Forms service is also priced on a month-by-month contract, as opposed to signing up for a full year. This is quite handy as some organisations may only require the service for a short period of time.

There are some functionality differences between Mobile Forms Standard, Advanced and Enterprise versions… Advanced and Enterprise allow you to custom brand your forms with a logo and colours, and provide other advanced data connection features that are only really necessary if you’re likely to create custom features or integrate Mobile Forms with one of your other systems (e.g. a database).

Check out the Device Magic website for more information on pricing.

Try before you buy (freemium)

I’ve spoken about the advantages of freemium models previously, and Device Magic has a version of Mobile Forms that can be used on a single mobile device free-of-charge. This is great for evaluating the service, seeing how it works and if it will fit well within your organisation.

I found Mobile Forms by Device Magic easy enough to use and was able to design a form and start collecting data within ten minutes (quicker depending on how long your form is). 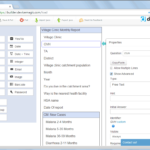 Creating forms through the web interface was quite straight-forward. The form builder interface is simple to use as clicking on a new question type in the toolbox will add that question to your form. A ‘Show Advanced checkbox then allows you to see the advanced options for each question in your form. One feature that was not apparent was how to re-order the list of questions, which could be done simply through drag-and-drop (but there was no visual indication that this was possible).

Connecting a form to Google Docs 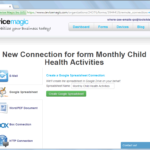 A really good feature, Mobile Forms allows you to connect a form to a Google Docs account. This is great for having form entries automatically placed in the Google Docs spreadsheet. Take note though, only new form entries from when you make the connection will be passed into Google Docs, so make that connection early.

As with any online service, there are a few limitations to Device Magic Mobile Forms:

Mobile Forms by Device Magic is a great tool for collecting form data, especially if you have multiple people that need to use the same form and

Device Magic is useful when:

Device Magic is not useful when:

A lover of all things internets, Tim is into websites, online marketing systems and software (he provides some of the technology and software reviews for tools4dev). In his day job, Tim advises small businesses and organisations on marketing communications, operations, systems and strategy.